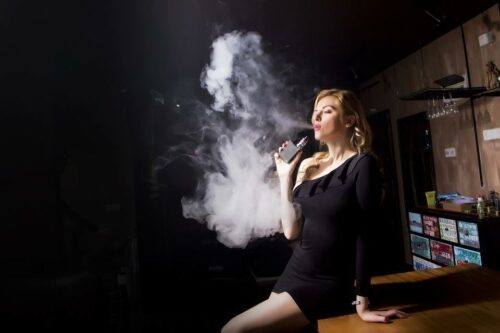 I’ve decided to do something a little bit different in today’s article. I have been reading and hearing a lot of talk about banning vaping on the news lately. It always makes me angry whenever I hear of this sort of thing.

When in history has banning anything ever solved the problem. If someone wants something enough, a person will always find a way to get it. Let’s look at a few examples, such as firearms, drugs, and alcohol.

Is Vaping Healthier Than Smoking Cigarettes

First off, I want to say I don’t vape, but I am a smoker. Do I think vaping is any healthier than smoking cigarettes? My answer is absolutely not! Common sense tells me that sucking smoke into my lungs or a liquid vape isn’t very smart or healthy for either of us.

We each have our various ways of coping with stress. Some people turn to drugs and alcohol, and others turn to different avenues of self-destructive behaviors, such as food. We have an obesity crisis here in the U.S. Does that mean we need to ban food?

I do understand the risks involved with either of these vises. I also know of a thing called free will as my right to choose how I want to live my life. Free will is what this article is about and the right to choose.

When are we ever going to learn that banning something doesn’t work! Whenever the government or whoever gets involved and rally’s to ban something, the matter always gets worse. As the old saying goes, if there’s a will, there’s away. And more people will end up dying because of it.

Vaping On The News

Let’s start by saying, in my opinion, every big news organization is owned by the rich and powerful to promote fear and disinformation to the people.

So when a topic comes up about banning vaping on the news, the first thing I ask myself is, if vaping is banned, who stands to gain from it? The answer is the tobacco industry.

I have seen a few commercials on t.v. as of lately putting down the vaping company Juul and a lot of negative publicity. Who do you think is paying for those commercial ads?

I think it would be safe to say the tobacco industry has started losing big profits because more people are turning to vaping over cigarettes. I think that would be a pretty good reason and incentive to push for the ban of vapes.

As the death toll rises to 37 in vape related deaths, the Center for Disease Control (CDC), World Health Organization (WHO), and Public Health Council (PHC) scramble to ban vaping even though they aren’t sure what actually caused the deaths.

They speculated it was THC, but yet some of them died vaping something other than THC. It would be better to keep their mouths shut until they pinpointed the culprit instead of speculating to the public or news agencies.

These are the same old tactics they always use to spread fear, panic, and misinformation to the public to divide us apart and fighting with one another over who’s right. Almost as if by design!

I’m not trying to making light of these deaths because it is tragic when anyone dies. But if I know the risks of smoking or vaping and I decide to do it anyway, then that’s on me and no one else. It’s my own damn stupidity and fault if I wind up dead. Free Will!

There are choices and consequences in everything we do in life, and I try and RESPECT everyone’s free will to choose what is right for them. Just because something isn’t right for me doesn’t mean it isn’t for someone else.

No one ever held me down and forced me to smoke my first cigarette. People can blame it on peer pressure all they want to, but the bottom line is I was the one who was weak and gave in to the peer pressure. But it also taught me a valuable lesson in the process.

Since smoking that very first cigarette and giving in to the peer pressure, no one has ever been able to pressure me to do anything I didn’t want to do ever again. Do I have regrets? Sure I do because it is an expensive and nasty habit, but only I can decide to give it up. No one can force me.

The problem with all of these government agencies and organizations is the fact they try to force us to conform and think the same way. Which goes against the free will God gave us to be our own unique individuals.

So all of these public health groups can try and ban vaping all they want, but they will create a bigger problem in the process. Because if people want something, they will always find a way to get it.

Another thing I learned growing up when I was a teenager was I used to drank a lot more alcohol before I became legal to purchase it for myself. I would buy it from bootleggers.

Once I became old enough to buy alcohol for myself legally, it took the fun out of it, and I pretty much stopped drinking. Life lesson! If something is illegal, it makes people want it that much more, especially the younger people.

Why is that you might ask? The answer is because none of us likes to conform and be told what we can’t do! Imagine what a different world we would live in if others would stop trying to adapt us to their beliefs.

The only Laws I try to uphold truly were written down in the Bible called The Ten Commandments.

What Are Your Thoughts About Vaping?

Well, I said at the beginning that this article was going to be different. I am not either for or against vaping. We don’t have to pick a side on this subject as a whole; it should be left up to each individual person’s Free Will!

I voiced my opinion, so I would love to hear your thoughts about vaping. Do you believe everything you hear about vaping on the news, or do you have your own opinions?

“When you buy something from this website, I may receive an affiliate commission.
These are my opinions and are not representative of the companies that create these products.
My reviews are based on my personal own experience and research.
I never recommend inferior quality products or create false reviews to make sales.
It is my intent to explain products so you can make an informed decision on which ones suit your needs best.”